#301
sparklee said:
I get my OPI Gelcolor from Trans Design. They are in GA - which is just a state away from me - so I get my items really quick, and so far their customer service has been good.
Click to expand...
OT ALERT!

Sparklee, I just saw this and had to bring it to you:

Sparklee, I just saw this and had to bring it to you:

I know Im just being lazy and the info is there if I go back through the thread but I just don't have time at the moment!

Could you give me a run down on the OPI gel, specifically how it compares to Shellac?

You seem to be the guru and I trust and value your opinion!

#305
I thought I'd give an update on how my at home Gelish is going. I had been getting them done at a salon for quite a while before I got my kit for Christmas.

After doing them at home a few times I started to notice some damage to my nails. There was some peeling of my nails but more concerning was bright white spots, even after trying Solar Oil in place of my regular nail/cuticle oil. At first I thought I was doing something wrong. The only other difference between me and the salon was Gelish vs. Shellac. After some trial and error I think I have figured it all out.

The ladies at the salon had been scraping/buffing my nails, sometimes pretty aggressively because the Shellac was REALLY sticking to my nails. It usually took more than 10 min to soak off, even with heat to accelerate the acetone working.

The buffing, along with extended soaks in pure acetone was damaging my nails. By removing the natural outer layers of my nails the acetone was doing even more damage! At home I had kept the buffing to a minimum but it was pretty hard to get the stuff off and I was still soaking too long in the acetone, with heat.

I started using a thin coat of OPI base/top coat under the Gelish foundation coat. I also switched from 100% acetone to a moisturizing nail polish remover (it doesn't say what % acetone but it is diluted). Stopped all buffing!!

The damage (mostly done at the salons but some by me) is almost completely grown out. The Gelish lasts just as long with the OPI base coat, with the exception of occasional lifting where the nails were/are still damaged. It is taking about 5 min to soak off with the diluted acetone so much less exposure overall. The polish comes off COMPLETELY like it is supposed to so no need to buff or scrape. I expect in another month they will all be back to normal. I'm glad because I'm loving the gel polish and I didn't want to give it up.


The only other annoying thing was that the Simple Sheer polish turned from a sheer pink to a sheer off yellow color. I added a few drops of Queen of Hearts to pink it up again. 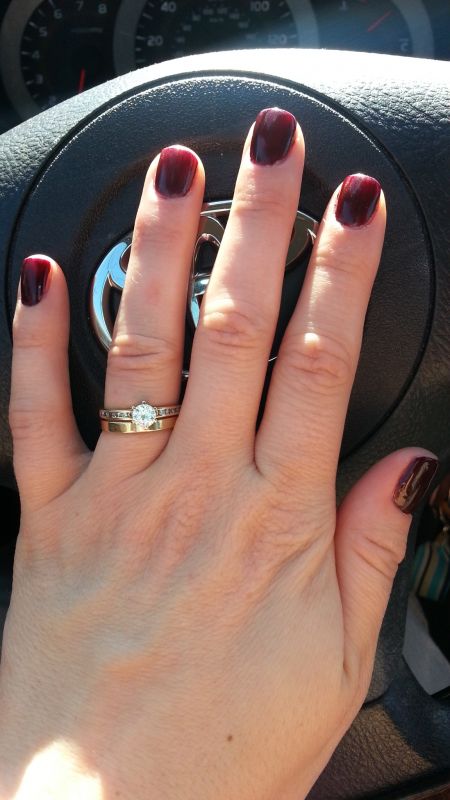